The Anti Semitism card has gone wild and has been and is falsely used to hide behind. In this section I will list the people accused.
Post Reply
1 post • Page 1 of 1 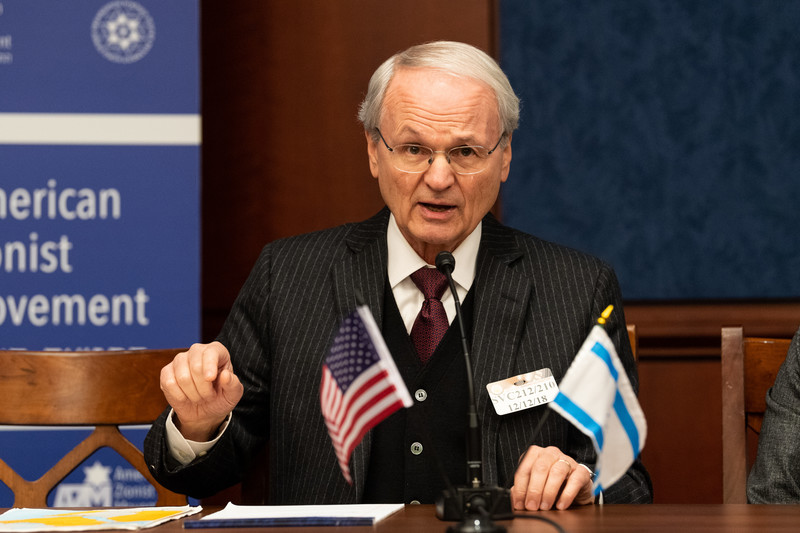 Morton Klein from the Zionist Organization of America

This individual is so vulgar that he deserves to be remembered for his racism and extreme hatred for anything and everything non Zionist. He makes Adolf Hitler feel like a stuffed teddy bear.

Zionist Organization of America director Morton Klein is on another fishing expedition for an equal rights advocate he can declare an anti-Semite.

What has Dann done to incur Klein’s wrath? She previously worked for Jewish Voice for Peace.

Jewish Voice for Peace supports “full equality for Palestinians and Jewish Israelis grounded in international law and universal principles of human rights.” The group backs any solution consistent with full rights for both peoples, but sees the prospects for a two-state solution as “diminishing” due to Israeli settlement expansion and the direction of Israeli leadership.

That suggests increasing support for one state with equal rights for all.

Such views are anathema to Klein, the ZOA and other commentators who continue to attack anyone who supports equality and freedom for Palestinians.

Klein, perhaps upset at talented young people advocating for Palestinians and their rights moving into positions adjacent to political power, tweeted on 14 January that Lander should “fire Dann immediately.” His claim that Lander’s hiring of Dann “adds fuel to the anti-Semitism fire” is backed by zero evidence and contradicted by the fact that Dann vigorously promotes equal rights.

The comment below came as part of a flurry of angry tweets and retweets from Klein regarding the hiring.


And he has repeatedly attacked Black Lives Matter while promoting falsehoods about what transpired when Donald Trump’s supporters stormed the Capitol Building on 6 January 2021.


Despite Klein’s frequent racist outbursts against Palestinians and Black Lives Matter, the ZOA remains a member in good standing of the Conference of Presidents of Major American Jewish Organizations.

Dov Hikind, previously a New York state assemblyman and a former close associate of the virulently anti-Palestinian Meir Kahane, appears to have initiated the attack on Dann in an interview with The Washington Free Beacon.

Hikind is on record as saying he spent years involved with the Jewish Defense League and that Kahane could be viewed as a “prophet.”

But what kind of prophet opposes marriage between Palestinians and Jews? Only a bigot promoting “anti-miscegenation” goes down that path.

According to the Free Beacon, Hikind termed Dann’s support for the boycott, divestment and sanctions movement for Palestinian freedom and equal rights “detrimental” and “insane.”

These claims from Hikind are themselves anti-Semitic as they suggest all Jews must think the same by supporting Israel and its anti-Palestinian policies. By his description, those who support a nonviolent movement for equal rights for Palestinians and Jews are undermining the “well-being of the Jewish people.”

In fact, many Jews back BDS out of support for equal rights and freedom.

Lander and BDS
Last week, Klein retweeted Melissa Braunstein, whose writing can be found in the Washington Examiner, after she asked “doesn’t Lander support BDS?”

But the reality is Lander does not support BDS, though he supported Ben & Jerry’s limited decision last year not to sell its ice cream in Israeli settlements in the occupied West Bank.
Lander tweeted in July that companies deciding “not to operate in settlements do not pose a risk to New York’s pension funds.” He added, “If anything, continuation of the occupation poses grave ongoing risks to Israelis, to Palestinians and to those who care about them.”

This is a very safe comment.
The full official statement from Lander is far more problematic. There, he voices his support for “Israel’s future as a Jewish and democratic state.”


“Israel’s future as a Jewish and democratic state.” A direct admission to apartheid against Palestine today

Such language excludes Palestinians and implicitly discriminates against them in much the same way as support for the US as a “white Christian state” would discriminate against numerous groups.

Hikind claims that Lander said more to him recently, stating that Lander “reiterated to me that he is 100 percent against BDS.” If true, it raises the question of why Lander feels so defensive in talking to a racist promoter of Meir Kahane.

The Washington Free Beacon also notes that Lander’s office told the publication – notorious for its attacks on Palestinians – that “Mr. Lander does not support BDS,” while adding that “he has strong confidence in Naomi Dann’s work as communications director.” (This is more than Congresswoman Ocasio-Cortez did to support Hussain Altamimi when he was under ZOA attack.)

Lander is on record as supporting Israel as a Jewish state – a stance which clearly discriminates against Palestinians – and opposing a non-violent Palestinian-led movement for freedom and equal rights.

But this isn’t enough for Klein and Hikind.

They’re going to criticize Lander for any gentle comments that appear sympathetic toward Palestinians. Consequently, he might as well just come out and say he not only opposes Israeli occupation, but supports equal rights for Palestinians and the BDS movement seeking non-violently to secure those rights.

That he won’t in the year 2022 is a disturbing commentary on politics in New York City that on the matter of Palestinian freedom are too much like those in the Jim Crow American South of the 1950s.

New Yorkers are right to challenge bigotry in other parts of the country, but there’s enormous room for improvement when it comes to how many of the city’s politicians regard Palestinians.

This isn’t a primary concern in New York City with housing costs, gun proliferation and public transit rightly vying for attention, but perhaps it’s an area where Dann will be able to share valuable insight with Lander.

Yet it is clear she has seen the discriminatory reality faced by Palestinians.

That’s not easily forgotten. The consequent insights are worth sharing with political leaders.

Brad Lander would be wise to listen to her and not be intimidated by right-wing, anti-Palestinian bigots such as Klein and Hikind.